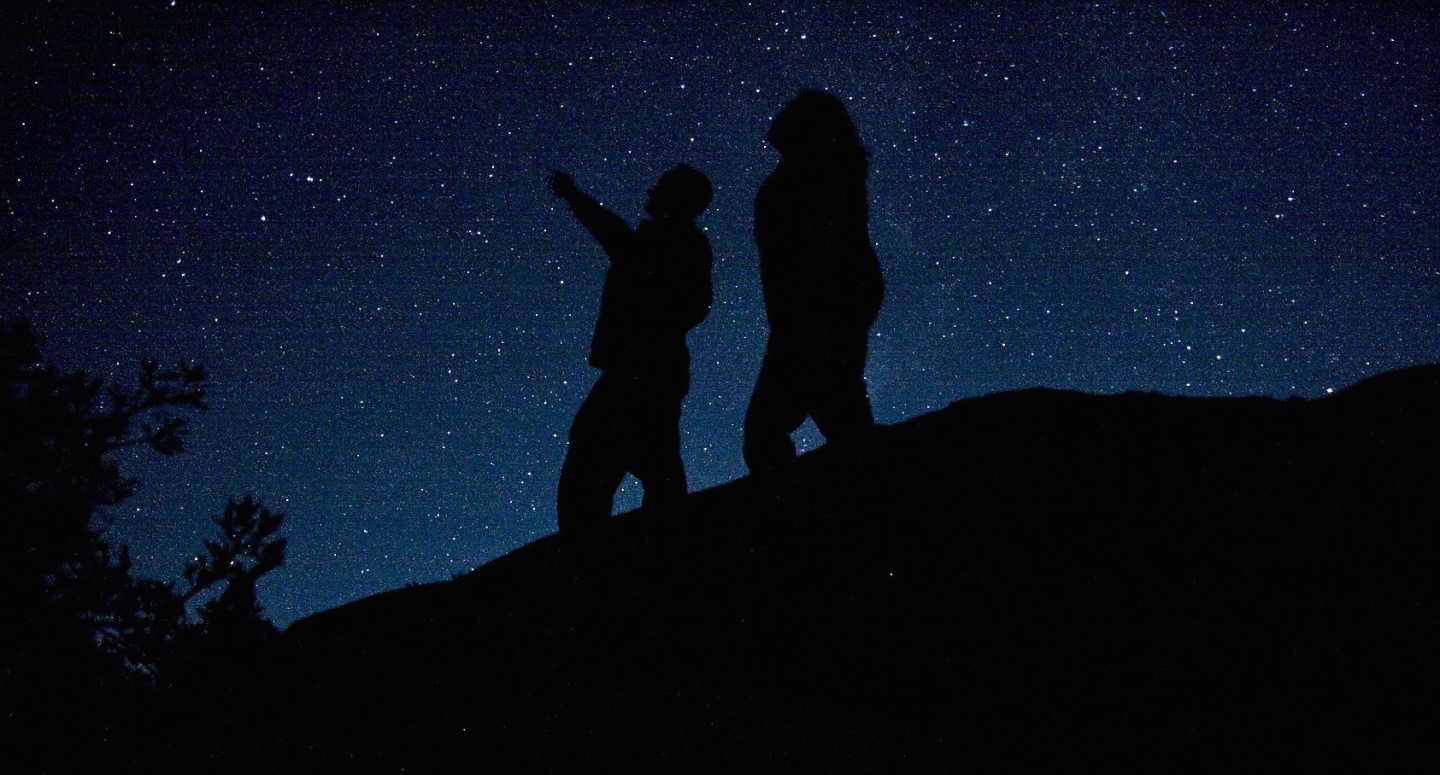 If you’ve ever read Superstar, you know that the main character Lester is a stargazer. And if you know anything about authors and our propensity to give characters our own traits, it probably doesn’t come as much of a surprise that I’m a stargazer, too. This past August, I was lying in one of those reclining lawn chairs out in my yard watching the Perseid Meteor Shower. As I lay there—listening to the music I love, with the person I love, staring up into that star-dotted sky—an overwhelming sense of peace came over me. It was one of those rare moments when I felt, pretty much, perfectly happy. It was a moment I’ll probably remember forever.

Another such moment occurred many years ago when I visited Yosemite National Park. After a long day of hiking, my friends and I all piled into our rented mini-van and made the slightly-terrifying drive up the pitch black, winding roads to Glacier Point. With the help of a flashlight, we made it to the spot in the picture above. Standing there, looking up at…well, that, I felt so close and connected to everything, especially the person standing there with me. It was actually his idea to get this picture. I was too in awe to think about anything.

I spend a lot (A LOT) of time writing. And whether I’m revising a novel or writing a blog post or creating web content (like this) or planning an author visit or even when I’m responding to an email or composing something as tiny as a tweet, I always begin with two questions: What do I want to say? And even more importantly, how do I want to feel?

Regardless of what I’m writing, at first, it always feels the same—as if I’m trying to grab ahold of of something that’s just out of reach. So, I sit with the words. I put more on the page. I take some away. Over and over and over again. Sometimes, this process takes a long time. Sometimes, this process takes a really long time. Sometimes, I spend days (plural) on a paragraph (singular). (Unfortunately, I’m not exaggerating here.) But eventually, if I sit with the words long enough, that thing that was just out of reach will suddenly be sitting in my lap.

These moments I spend writing are numerous, but small. Hey, remember that time I wrote that thing and immediately deleted it because it wasn’t right at all? is something I’ve never said. Those small moments along the way all get forgotten, like the steps along the path leading from the parking area out to Glacier Point. But without them, we’d never make it where we’re going.

Steps along a path. Words on a page. A game played with friends. Something your teacher said when you were ten. The time that author came to your school. Unless something out of the ordinary happened, you would probably consider most of these to be small moments, mere footnotes in the grand story of your life. I know I do.

I’m nearing the end of my fourth decade here on this “mote of dust suspended in a sunbeam” as astrophysicist Carl Sagan referred to Earth in his famed Pale Blue Dot address (which hangs along with this photo on the wall of my writing room).

This picture was taken in 1990 when I was ten—when I read books I no longer remember and when some author, whose name I can’t even recall, visited my school. As I was playing kickball at recess with classmates I no longer know, the Voyager 1 spacecraft was just about to leave our solar system and travel on into the stars. Just before going, Sagan asked them to turn the camera around again and take one more picture of Earth. That “pale blue dot” you see in the photo is us.

In these thirty some odd trips I’ve made around the sun, I’ve learned something. While we may not be able to remember all of these small moments, or even most of them, they matter just as much as the big ones—maybe even more.

Because in living through all these small moments, we have become who we are.